Hari Sreenivasan: Officials are calling the Immigration and Customs Enforcement raid of several Mississippi food processing plants this week one of the largest enforcement acts in recent U.S. history. Nationally raids like this have detained and deported thousands of suspected undocumented immigrants. And ICE says they are also stepping up criminal investigations against the individuals and companies that employ them. Adolfo Flores is National Security Correspondent for Immigration at BuzzFeed News. He joins me now from McAllen, Texas. Tell me a little bit about the disparity here. We saw the raids, we saw the people being handcuffed and marched away. Those were mostly the workers. What happened to the employers?

Adolfo Flores: So far nothing has happened. The employer which is something that immigrant advocates are pointing out is 680 people were detained hundreds of them are still in ICE custody and the bathroom or the employers who hired them having been detained or really face any consequences yet.

Hari Sreenivasan: So why is that?

Adolfo Flores: The law is around this, was was written is, employers aren't breaking the law by hiring undocumented workers. What happens is if they are found to be in violation of the law it's because they knowingly hired undocumented workers. It's a knowingly that's tough to prove for prosecutors. And so that takes more time and not only more time it makes it harder for them to prosecute. So some people would say that the immigrants are the low hanging fruit whereas the employers are tougher to get and more often than not they don't really face any criminal charges, fines if anything. 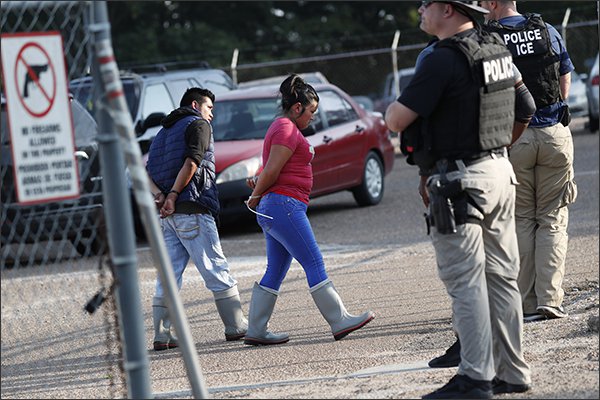 Hari Sreenivasan: What are the advantages that an employer has to hire undocumented workers?

Adolfo Flores: I mean just that they are you know they're cheap, you don't have to pay them as much. But there's also the fact that they may be less inclined to complain or if their wages are being taken away, an undocumented worker is not going to feel as empowered as someone who has papers to go and file a complaint. And so you know cheaper cost and then the other side of that is what makes them more appealing to employers.

Hari Sreenivasan: So there have been databases to try to keep track of this gap between how many employees or undocumented immigrants or are arrested versus employers. When you go back and look back and forth not just at this rate what do we find?

Adolfo Flores: What happens is a lot of the employees you know don't use documents that aren't theirs but they're still valid numbers. And so the employer will run them through E-Verify and they'll say you know we did everything that we possibly could to verify that these employees were here and they were able to legally work. So if it's hard to prove that you know. And it's also easy for people to get into the system and not raise any red flag.

Hari Sreenivasan: In the past couple of years how many employers you think have been either convicted or well, arrested or in any way kind of brought to justice about this?

Adolfo Flores: There was an analysis done by TRAC at Syracuse University that looked at the number of prosecutions against employers and they found that from April 28 to March 29 of 2019 only 11 individuals not companies were prosecuted for hiring undocumented workers. At the same time during that period more than 120,000 undocumented immigrants were charged for illegal entry or illegal reentry. So that's pretty stark when you look at those numbers.

Hari Sreenivasan: All right. Adolfo Flores from BuzzFeed News is joining us via Skype from McAllan, Texas tonight. Thanks so much.