This is Faith Lapidus. And this is Steve Ember with People in America in VOA Special English. Today we tell about the life and music of American songwriter Cole Porter.
That was "Begin the Beguine" played by Artie Shaw's orchestra in nineteen thirty-eight.
It is one of almost one thousand songs Cole Porter wrote. In his seventy-three years, more than five hundred of those songs were published. Porter wrote most of his songs in the nineteen twenties, thirties and forties. Yet they remain as fresh as when he wrote them.
Cole Porter's songs are still being sung and played today. They are performed at musical theaters, jazz clubs, even rock-and-roll concerts. A movie about his life, called De-Lovely was released in two thousand four. Kevin Kline stars in the movie as Cole Porter. Ashley Judd plays his wife, Linda Porter. Popular young performers of today sing his songs in the movie. We will play some songs from that movie later in this program.
Cole Porter was born June ninth, eighteen ninety-one, in the middle western state of Indiana. His family was wealthy and educated. His mother, Kate, guided him to music at an early age. He wrote his first song at the age of ten.
As a young man, he was sent east to study at Yale University in New Haven, Connecticut. In his extra time, he continued to write songs. Two were for the university: the "Yale Bulldog" song and "Bingo Eli Yale." They are still sung there today.
After finishing his studies at Yale, Cole Porter went to Harvard University in Cambridge, Massachusetts to study law. That plan lasted only a year. At a party one night, he played some of his songs for the students and professors. The head of the law school spoke to him. "Why are you studying law? he asked. "You are no good at it. Why don't you go to Harvard's Music School and then write for the musical theater?" Later, Porter said: "That idea had never entered my head before. "
At the time, musical theater was extremely popular in America. This is because there were few music records. And radio programs were still being developed. So, songwriters had to work in the musical theater to be successful. Cole Porter wrote his first musical show in nineteen sixteen. He was still a student at Harvard. The show was called "See America First." It was produced in the Broadway theater area of New York City.
The show was a complete failure. Porter wanted to leave town until people forgot it. So, he went to Europe. He stayed there for most of the next thirteen years.
During this time, Cole Porter became famous for his parties. His guests were wealthy, pleasure-loving people from all over Europe. They liked him because he was smart and funny and knew how to enjoy life. And they loved his songs, which he played at his parties. Here Cole Porter sings his song, You're the Top.
In France, Cole Porter met the woman who became his wife. She was a beautiful and rich American named Linda Lee Thomas. They were married in nineteen nineteen. The Porters gave parties that lasted for days. They had so much money they could do anything they wanted. And they did. Their life together was a search for excitement, adventure and pleasure. 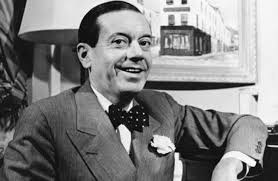 Still, Cole Porter remained a serious, hard-working songwriter. He wrote both the words and the music for his songs. The words and music always fit together perfectly. His songs were funny, sexy and intelligent. They were playful -- full of little jokes and hidden meanings.
One of his earliest big hits is called "Let's Do It (Let's Fall in Love)." It was written in nineteen twenty-eight for a show called "Paris. Alanis Morrissette sings the song in the movie about Cole Porter called De-Lovely.
Some of Porter's friends thought he might not be a success. One friend, Elsa Maxwell, told him: "You are too good. The humor and poetry of your words are far beyond the people. One day, however," she added, "you will bring the public up to your own level. Then the world will be yours."
Most of Cole Porter's songs are about love and desire. When they were written, they stretched the limits of what was socially acceptable. The words were often unexpected, sometimes even shocking. They spoke both directly and indirectly about sex, about drug use. Some songs he sang only for his friends.
Critics consider "Love for Sale" to be one of Porter's finest songs. He wrote it in nineteen thirty for a Broadway musical called "The New Yorkers." For years, the song was banned on American radio. Here is a new version by Vivian Green.
Many of Porter's songs were written in a minor musical key. This gives them a feeling of sadness and longing. Yet they also can have a feeling of great excitement. American songwriter Alan J. Lerner said only Cole Porter could really "write" passion. One example is "Night and Day." It is considered perhaps the finest song Cole Porter ever wrote. It is about the kind of romantic love that is almost a form of insanity.
Porter got the idea for the song while traveling in Morocco. He heard drums and a man singing a prayer. The song has a sound that beats endlessly, over and over. It is like a lover who thinks of nothing but his love, over and over, night and day.
The song "Night and Day" was introduced in a nineteen thirty-two Broadway musical comedy called "The Gay Divorcee." The great dancer and singer Fred Astaire played the leading male character and sang the song.
"Night and Day" became famous around the world. And Cole Porter was becoming one of the greatest songwriters America had ever produced. Today there are many recordings of the song by different singers and musicians. Here is Night and Day from the movie about Cole Porter called De-Lovely. John Barrowman and Kevin Kline sing it.
On our program next week, we will tell more about Cole Porter's life, and bring you more of his music.